In the last 18 months of Michael’s life he suffered three different accidents which led to injuries to his legs. Incredibly two of these incidents occurred on the exact same day, 1 year apart. This reminds me that he actually spent his last three birthdays in the hospital.

With each injury it seems like we went through many of the same stages. Initially there was lots of blood and panic. We rushed to the emergency room, sometimes by ambulance, and were met with all the medical personnel. There’s was lots of paperwork to be done on my part. Michael was in severe pain each time as the doctors rushed around trying to determine how best to treat him considering all his other medical issues. But the first issue was always how to stop the bleeding and manage the pain.

Once the emergency was under control, there was the course of treatment so his leg could heal. Surgeons were often called in to consult. Antibiotics were always started, along with pain meds. And the routine of bandaging and dressing the injury was determined. Sometimes he required stitches. Often there was not enough tissue to stitch back together, so we’d embark on a long road of waiting for new skin to grow.

Eventually – gradually – he would be able to do the things without so much pain. He never looked forward to some parts, like bandages and debridement, but he got through them and went on to what he needed to do that day. And slowly the skin would grow back and cover the injury. But even after the skin had completely grown back, he always had a scar there. For the rest of his life he had a scar. And the funny thing about that scar tissue — there were some places on that scar that continued to be incredibly sensitive to any little thing that touched it. And there were some places on that scar that never regained their feeling at all.

As I remember all that Michael went through with these injuries, I’m beginning to feel like I’m following the same path to healing. When he first died it was an emergency. There were medical personnel and lots of paperwork for me to do. There was a sense of panic sometimes as to how I would face tomorrow. And there was lots of pain and crying out. Especially the first time I’d try to do those everyday things. Things like going to the farm or the beach. Like opening a closet door or driving his Hummer. Like going back to the church service we always used to go to. Gradually I’m able to face these things without the pain being quite so severe, and then go on to do what needs to be done.  I continue the course of treatment.  My antibiotics are prayer to keep me from being infected with bitterness and anger.  And my bandages are the many people around me that protect me and soften the bumps in life.

But I think that even when the pain gets to be manageable, I’m going to have a scar. For the rest of my life I’m going to have a scar. And I think there will be some places on that scar that will always be particularly sensitive to anything that bumps into it. Sensitive enough to bring tears and feelings of longing. And I think there may be places on that scar that I will never be able to feel again. Because even though the skin grows back and the scar is evidence that you can heal, it never looks the same.

You know, the things I mentioned in the last blog were just a few of the many comments that I’ve heard in recent months.  And I know absolutely that none of these things have been said with any malice at all.  In fact, I’ve said all these things hundreds of times myself in similar circumstances and have been genuinely concerned when I spoke these words.  But the interesting thing is, I don’t think we know what to say when someone dies.

I think the reason is because dying isn’t natural.  (Of course this is contrary to another statement that someone told me, “Dying is a natural part of living.”)  I think dying is unnatural for us.  When God made man (back in Genesis 1 and 2) He made him in God’s image. Scripture says He breathed into man the breath of life and man became a living being.  God Himself is eternal and when He breathed his spirit into us I believe He created us as eternal beings.  I believe He has always intended for us to live eternally.  Remember, the only reason we die is because mankind chose to sin (Romans 6:23 – the wages of sin is death.)  Death was not a part of God’s plan for us, but the consequences of our fall.  And as such, it doesn’t feel natural or come easily to us.

Suddenly we’re separated from those we love.  It feels like they’re gone.  Yet deep inside our God-breathed spirit, we know that we are eternal creatures.  So how can we reconcile these two things?  I don’t think we reconcile them by one comment or even one conversation. I think we gradually learn to bring our memories of what was together with what we know by faith will be.  It doesn’t happen immediately.  I think it’s a process.  And I’m processing.

So, what should you say?  It’s OK to say “I’m sorry for your loss” and “I’m praying for you” (but only if you really are).   And please be patient with me when I sometimes receive things differently from the way you intended.  My “receivers” are very sensitive.

PS — When I wrote the last blog entry I didn’t know what response to expect from people.  It’s been wonderfully flattering to know so many people have read that post and I’ve loved all the responses (well, to be honest, I’ve loved almost all the responses).  Some of my friends (you know who you are) are now afraid what they say to me will be the subject of the next blog.  HAHAHA !!   Oh, the power of the pen (or the keyboard, in this case). Thanks for reading along!

“At least he’s not suffering anymore.” — True.  I know it’s true that Michael is no longer in physical pain and I am so thankful for this. But I do want to scream that those of us that are still here without him are suffering plenty.

“He’s in a better place.” — True.  I have complete confidence in God that Michael is now in heaven.  But he’s left a huge whole here.  And most nights I cannot imagine a place I’d rather him be than on the other side of the bed from me.

“God takes the good ones/young ones/etc. so soon.” —  This doesn’t make sense to me.  If he was so young and so good it seems like God would need him to be here on earth more than in heaven.

“You’ll see him again one day.” – I believe with all my heart that this is true.  But it doesn’t bring much comfort now to think I have to wait 20 or 30 years to see him again.

“How are you?” — (This is not really a bad thing because, you know, how else do you start a conversation?)  This is usually accompanied by a look of pity, the head tilted to one side, and the shoulders slumped.  There’s no real answer to this question.  (Most of the time people don’t really want to know because if you told them the truth you’d send them running.)  Sometimes you just say “Fine” or “OK” even though things are far from fine.  Sometimes you say “Some days good and some days bad” which at least honestly acknowledges that things aren’t fine but doesn’t begin to express how empty and lonely life can still be.  But usually I can still manage this response without the lump in my throat taking over.

“You’re so strong.” – Well, I’m not strong.  It may look like I’m strong, but from this side things look pretty weak.  I think the only good take-away is that if I look strong to people on the outside maybe it’s Jesus they’re seeing instead of me.  Because I feel weak. I feel helpless.  I feel pathetic.  I feel a hundred different things, but strong is not on the list.

“You’ll get through this.” – This makes it sound like it’s a 10K and you get to the finish line, walk across and then you can go home, put your feet up and it will all be over.  You don’t just get through this.  I think this is now a part of you for the rest of your life.  I can’t imagine a day when I’ll look back and say “I got through that.”

“How’s Michael doing?” – This is when you run into people that don’t know that Michael has died.  Now you get to tell them.  Plus you get to watch first the shock on their face and then their embarrassment at not knowing.  His obituary was in two different newspapers, it was plastered all over Facebook and 800 people came to his funeral service.  I have a box of hundreds of cards and I’ve received thousands of emails, texts and messages from all over the world.  And, son of a gun, if I don’t run into somebody who doesn’t know.  This is probably the worst.

So what would I like people to say?  I’m glad you asked.  Stay tuned.

According to the dictionary a surprise is an unexpected or astonishing event, fact or thing.  Life is full of surprises.
Like when your daughters come home for a special day with you and you spend the time having pedicures and lunch, with a little wedding planning squeezed in between.
Like when you find a special treat left on your front porch by Precious L.  And no, it wasn’t a puppy.  (Thank goodness!)
Like receiving over 120 birthday wishes on Facebook which makes your cell phone chime all day long as they come in.
Like friends indulging you so you can spend the whole week celebrating your birthday instead of just the one day. 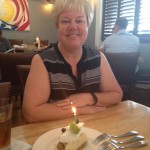 And one last one.  Several years ago a sweet friend gave me a beautiful (and large) pad of paper as a hostess gift.  It’s been on my desk all that time and I have used it for all manner of things.  The pages are perforated so you just tear each page off as you need it.  But apparently quite some time ago someone tore off a page, wrote me a message and then slipped the page back into the bottom of the pad.  And this was a wonderful surprise to find.  Just a reminder.  Just a token.  Just a sweet message. 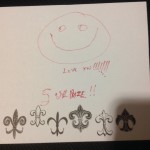 May all your surprises be good ones.  Love you all and thank you for making today special.