Many years ago a precious friend gave Michael the nickname “Magnum”.  I think it was a great description of a big guy with a big personality and a big heart.  So when we found the property that would eventually become our land that Michael loved, there was no better name for it than Magnum Farms.

As we bought these 250 acres, we found much of it criss-crossed by barbed-wire fencing and overgrown tree lines.  Michael had a vision of something different and he set out to clean it up and dress it up.  As the years passed he and his crew dressed it into more of a park, with rolling pasture land and four ponds filled with fish and the occasional alligator.  His long term vision was that there would be about a dozen cottages scattered across the acreage to be used as quiet places of retreat for those in ministry needing a place of respite.  Unfortunately he was not able to see that happen.

Now comes the time to say goodbye to Magnum Farms.  Those close to Michael and I know that this farm was always Michael’s dream.  I am the city girl and he was the country-loving boy. (Think Eva Gabor and Eddie Albert in Green Acres.)  Even though that was the case, and in spite of some of the hard memories I’ve relayed, I loved coming here.  But I loved it because Michael was here.  And if given the chance I’d still be coming up here with him — because wherever he went, I was going too.

If Michael was still alive, we’d still be coming to the farm and I wouldn’t be saying another goodbye.  But he isn’t.  And I am.  This somehow seems like just another in a long list of goodbyes.

So as I leave I know that this place will no longer be Magnum Farms; it will be known by another name.  But a bit of Michael has left an imprint here.  Whether it’s the dozens of peach trees he loved so much, or the blueberry bushes and blackberry vines he planted to please his wife.  Or maybe it’s the care he took to make sure the land was in better condition than when he bought it.  And we can’t forget the incredible farmhouse he built on top of the hill – the big stone fireplace for him, the little fireplace with the punched tin panels for me, the porches to catch the breeze, the windows across three sides of our bedroom so he could see the sun rise.  All these things will stay behind as I move on.

And I guess this is how it is meant to be.  For who among us can really call the land our own.  It is only by God’s grace that we are allowed to tend it for a short time. 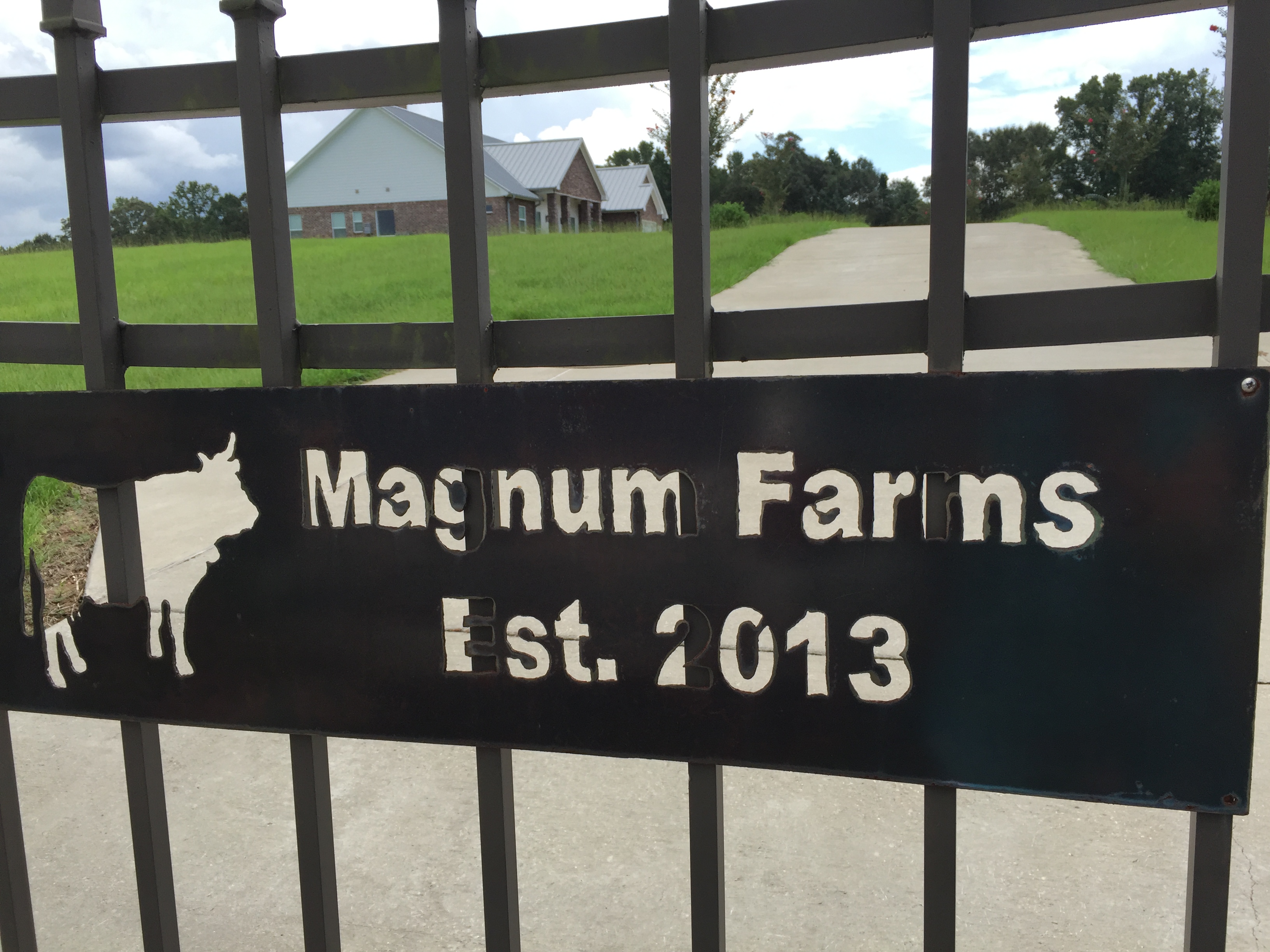 Even though we’ve only owned the farm for about seven years, there’s certainly no shortage of memories here.  As I sit at the kitchen table looking out over the pasture, there are so many things that come to mind. I remember Michael and his crew clearing the underbrush and pulling down the old fences; finding old bones from cows and other assorted animals; stocking the ponds and then fishing in the freezing cold; salvaging enough firewood to fill up the old barn; picking wild blackberries while avoiding snakes; following trails through the state park that is our neighbor and helping the park rangers find campers who’d lost their way and wandered over to our property.

We’ve had so many visitors here and Michael always enjoyed showing them around.  There have been kids and families who came by to feed and visit with the cows and donkeys.  College and seminary presidents who stopped in for lunch and a four wheeler ride.  Girlfriends for slumber parties and fellas for camping trips. Parents and grandchildren to fish the ponds.  And lots of friends here just for porch-sittin’.

There have been dreadful times.  My heart aches as I remember.  Like the time we were just beginning to build the farmhouse.  It was the day after Thanksgiving when Michael fell and hit his knee on the brick ledge.  There was blood everywhere!  The workers picked him up and put him in the back of my car. I’ll never forget holding his leg up in the air trying to stop the bleeding as Andrew raced us to the emergency room miles away.

And then there was the last winter we were here when he fell on some ice and his leg was trapped under the four wheeler.  I still remember the exact spot on the side of the house and running to the gate to let the ambulance in.  I remember the policemen who came and the look on the EMT’s face when he cut his pants leg to see the damage.  And I remember the drive in the police car to the local hospital, followed by the long drive back alone to NOLA that night as I followed the ambulance carrying Michael.

The hardest memory is one I still can’t seem to speak the words to describe.  One afternoon late in the fall Michael went out to check on things and I stayed back at the house.  A few hours went by and it began to get dark and cold.  I tried to call his phone several times but there was never any answer and I couldn’t see any sign of him from the house, even with the binoculars.  I called and called to him from the porch but there was no answer.

Finally I decided to set out in my SUV to find him.  For about an hour I drove across the acreage looking for him, stopping every few minutes, turning off the engine and sounding the horn to see if he would respond.  Again and again there would be nothing but silence.  At last I thought I heard a voice calling in the dark.  I drove a little in that direction and did it again.  Turn off the engine.  Sound the horn.  Yep, I heard him calling.  It took several more tries before I finally could understand him and make my way to where he was.  He had been feeding the animals and fallen in the pasture.  His cell phone had been left in the four wheeler.  I finally had to call our policeman friend to come help me get him back home to the house.  Even as I write this my throat closes up when I think about how scared I was when I couldn’t find him.   When we finally got home I wanted to scream I was so angry, but I couldn’t speak I was so scared.  But he needed me to take care of him.  So that’s what I did.

There are so many good memories too.  Lots of quiet nights; just the two of us; old married folks content to just be in the same room together; knowing that we loved each other without condition or regret.

One of the best memories here for Michael and for our family was our only Thanksgiving spent here.  The house had only been finished a few months and our families were gracious enough to travel the hundred miles to share Thanksgiving here.  The twenty-five or so of us had a great day.  There was food as far as you could see.  Lots of laughter and silliness and family pictures.  We both enjoyed having all of our siblings here.  After lunch it was time for skeet shooting over the pond, four wheeler rides, sitting by the fire and rocking on the porch.  It was a grand day.  And as it turned out it was the last Thanksgiving for my mom and dad, and for Michael too.

My heart aches as I sit here in this place.  It will always be filled with Michael — his hard work, his enjoyment and his unfinished plans for the future. 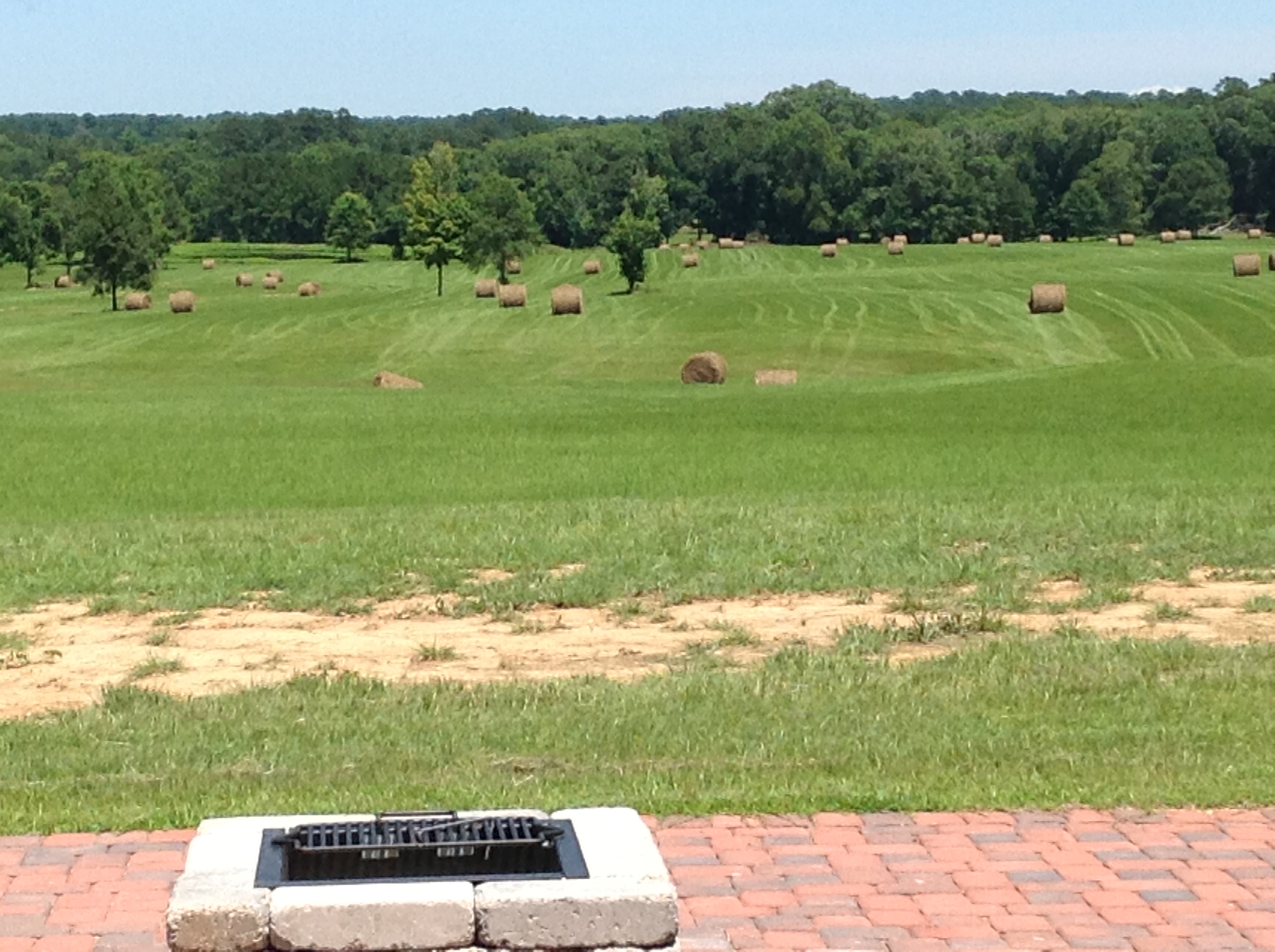